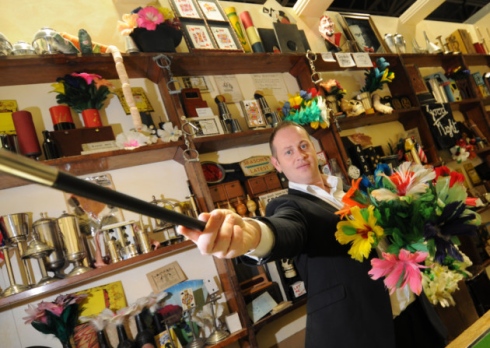 A Magical Story To Tell

The Cremation Illusion. Stretching a Lady. The Girl Without a Middle. Maskelyne’s Spirit Cabinet. The Wrist Chopper. The Vanishing Handkerchief Gun. These are just a handful of the astonishing exhibits at Norfolk’s most magical attraction, Davenport’s Magic Kingdom.

Next to the skeleton remains of industrial units past, it’s an incongruous yet strangely fitting venue for a magical kingdom where curiosities and enchantment lie in wait for those that pass through the doors.

Davenport’s Magic Kingdom opened in North Walsham last summer and houses a fraction of the famous Davenport family’s collection of vintage magic ephemera in a 15,000sq ft warehouse, plus an interactive exhibition – From Witches to Wonder – which takes visitors on a journey through the history of British magic, a theatre where magic shows take place daily, a shop filled with wonder and a café for hungry magic fans.

The £1 million venture at the site of the former Crane Fruehauf trailer factory site has been funded by a £700,000 investment from the Davenport family, a £100,000 grant from the Rural Development Programme for England and a £200,000 commercial loan. And it is, quite literally, magic.

Inside, the walls are filled with the most fantastical exhibits: the unicorn and lion from the Exhibition of Great Britain in 1951, back drops used by magicians through the last century hang from the ceiling, giant moth wings that were part of an act, hundreds of vintage posters, stage sets, Punch and Judy boxes, the famous prop used to saw winsome ladies in half, ventriloquists’ dummies, a headless lady, a plant with teeth, Houdini’s water torture cell… it’s an Aladdin’s Cave for those that love magic.

There’s even a faithful recreation of the London magic shop run by the Davenport family in the first half of the 1900s with original stock and signs, sleight-of-hand magicians in the shop, a resident witch and a concert piano which will, in the near future, magically play itself.

Unsurprisingly, magician Roy Davenport is delighted with the new attraction and the chance for his family to share their incredible collection, thought to be one of the most impressive in the world.

“My great-grandfather Lewis lived in east London – his own father had died when he was eight and as the eldest boy he was expected to start work as soon as he could. It was a hand-to-mouth existence and the family had to keep moving because they couldn’t afford to pay rent,” said Roy.

“He became an apprentice cooper, making barrels, but found he had a talent for juggling and used to go round pubs in London to earn a few farthings extra. A magician came to stay with the family as a lodger and showed Lewis how to do a few tricks so he could include magic with the juggling.

“Lewis started to play at a few clubs and theatres, working his way up to the music halls meaning he could give up the day job to concentrate on magic. He started selling tricks by mail order and by 1908 he opened his first magic shop, writing all the trick instructions by hand and making the tricks himself.”

Roy’s great-grandfather acquired a printing press in order to produce magic catalogues and his son followed him into the business while he made a name for himself on the magic circuit, playing at some the biggest venues in Britain and Europe.

While in Germany, Lewis made contacts with factories, arranging to sell their magic tricks from his shop in central London. By 1929, the poor boy who had to keep moving to avoid the rent collector had bought himself a 16-bedroom mansion in Kent, followed ten years later by the Rolls Royce that is today on show at Davenport’s Magic Kingdom.

Next to take the reins was George “Gilly” Davenport who took over the magic shop’s management and continued to add to Lewis’s collection of props and ephemera, acquiring a host of exclusive performing rights from famous magicians including all the illusions and effects debuted at the famous Maskelyne’s magic theatre, St George’s Hall, where Lewis had performed more than 3,000 times.

Lewis died in 1961, his son died the year after and the business was left to his daughter Betty Davenport who had started working in the shop in 1948 at the age of 14.

“I remember Lewis well and I’ve always been brought up in the business so it’s second nature to me,” said Betty, Roy’s mother.

“When I was younger I used to do little shows but my father died quite young when I was in my 20s and so I took over the shop so my magic became demonstrating tricks to customers while trying to look after my children at the same time!

(Roy added: “When my brother and I came along, Mum used to push us up to the shop in our pram. We were fascinated by magic – our playtimes were spent crawling around the back of the shop and finding new tricks. When I asked her how to do a trick, she was normally busy with a customer so I had to work them out myself. It’s the best way to learn magic!”)

“To have our collection on show is a dream come true. The only other collection that I think comes close to what we have is the one owned by David Copperfield and that’s on a private Caribbean island and you need to have an invitation to see it!”

Betty’s husband, Fergus Roy, forged his own career but was lured into the magical world in 1979, creating a television show called Illusions for Thames Television in the 1980s, working with Betty at the Davenport’s shop and writing four volumes about the family’s history.

“It was an emotional moment when we walked through the doors here for the first time,” he said.

“We have waited for this for so long that it was like a dream come true. We hope that in time we can show even more of our collection and that we can bring more magic to people – we have a whole warehouse of amazing artefacts that we’d love to have out on show.”

With a host of awards to his name – including prizes from the International Brotherhood of Magicians and the World Magic Championships – Roy may have been destined to join his family’s magic circle, but at one point he flirted with the idea of becoming an engineer.

“I’d always done tricks and I was at a magic convention once and a famous American magician said to me that I’d be mad not to pursue magic. He actually said I was an idiot and should wake up!” he laughed.

After three years at drama school, Roy became a full-time magician. His love for Norfolk was born when he starred in a Cromer Pier show – living in a remote part of the county was, he realised, the perfect counterfoil to a life spent on the road, performing in front of thousands of people.

He, his wife and children now live in a small hamlet in north Norfolk and love the seclusion.

But the magic of the family’s latest venture has captured Roy’s heart and his enthusiasm is infectious.

“I want people to step into an entirely new world of wonder, to be amazed and to go home wondering just how the magic they’ve seen is done. Magic has been my family’s life for four generations and we have always wanted to share it with people,” he said.

The venue is hosting a fundraising event for the EDP’s Norfolk and Lowestoft Flood Appeal on February 8 at 7.30pm (bar opens at 6.30pm). Tickets cost £10 and there will be a host of acts including magicians, singers, jugglers and comedians.