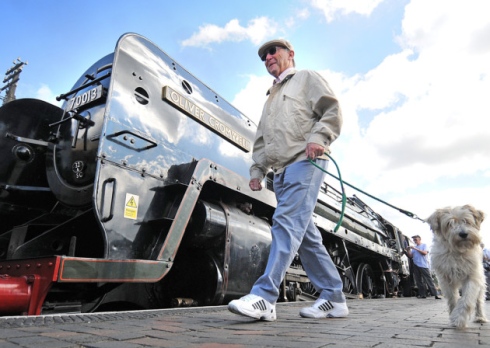 Maintaining the heritage of north Norfolk’s railway has been highlighted by campaigners behind an ambitious project to bring trains back into Holt town centre.

Enthusiasts spearheading the Norfolk Orbital Railway plan have spoken about their desire to protect the line’s history, amid suggestions hoped-for commuter trains could detract from the heritage service run by the North Norfolk Railway (NNR).

The orbital project is being led by the Melton Constable Trust, which hopes to extend the track into the heart of Holt, bringing regular services from Cromer, and eventually continue it into the rest of the county.

Services would be linked by track owned by the NNR, which runs vintage locos from Sheringham to Holt and has stressed it does not want to compromise its timetable.

But David Bill, trustee of the constable trust, said he wants the two to complement each other.
“What matters is the ability to take people from A to B, and personally I’m not too worried about what those trains look like,” he said.
“The diesel rail cars which are presently used on the NNR are identical to the diesel rail cars that ran into Holt all those years ago.”

Mr Bill has long-established links to the line and said protecting its history was of personal importance to him.
He added: “To me the heritage of the railway is as important as anything else and nobody feels more strongly about the heritage than I do.”

The orbital scheme has taken another step forward with the purchase of a further 50 yards of former track bed, and Mr Bill said the trust was now concentrating on buying more land.

Colin Borg, NNR marketing director, said the Poppy Line was “broadly supportive” of the orbital scheme and would love to see trains steaming back into Holt.

“We’ve talked about maybe running an (orbital) train early in the morning through to the new station and return in the evening, but the board are absolutely determined that steam heritage services will be the primary service from Sheringham to Holt.”

For details about how you can support the orbital scheme visit www.norfolk-orbital-railway.co.uk

For more information about the NNR visit www.nnrailway.co.uk